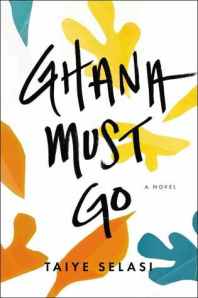 I wasn’t too moved when I first read the synopsis for Taiye Selasi’s debut novel, Ghana Must Go:

Kweku Sai is dead. A renowned surgeon and failed husband, he succumbs suddenly at dawn outside his home in suburban Accra. The news of Kweku’s death sends a ripple around the world, bringing together the family he abandoned years before… What is revealed in their coming together is the story of how they came apart: the hearts broken, the lies told, the crimes committed in the name of love.

I don’t know…something about it starting off with a death in Ghana didn’t sit right with me; but a lot of folks were cosigning the book, so I went ahead and added it to my to-reads list. My hesitance, then, resurfaced once I saw all of the press the novel was receiving from mainstream media. (I mean could I really trust them to recommend me a book set in Africa?) Still I placed a hold on the book at my local library. I got the email that it was ready for pick up several days ago but waited until yesterday to check it out. I started to read it while still in the library. Within a few pages, my concern that the book was over-hyped quickly faded. I mean if someone else’s writing gets me to put pen to paper, it’s got to be something special, right?

Well, I had an interesting encounter at the library and Taiye Selasi’s writing encouraged me to write a flash piece about it. Check it out:

Page 17: Kweku Sai had begun to choke on his own tears, watching as his newborn daughter struggled to live. His eldest son, Olu, was there to calm him.

An elbow planted firmly on the edge of the book, knuckle at my temple, I leaned into the carrel, not wanting to miss any of the story. I, too, was fully invested in the survival of Baby Sai; but I, alone, was in charge of my composure. The heels of my feet — which, if still, would hover over the floor — channelled momentum into my toes. They had already been in motion, a soothing habit of mine; but as the story moved forward, they moved wildly, in anticipation. They must have been what caught her attention.

With authority, a woman’s voice pulled me away from the story, “Excuse me.”

Now a jumble of emotions from the plot and the interruption, I turned to face the woman. A sense of nervousness crept through me. It was the library’s security guard. I’d seen her wield her power before, chastising the nearly full library about a missing bathroom key. She was going to tell me that I couldn’t charge my phone in the library. “Yes?”

“How old are you?” She sounded less forward now.

I smiled at her, still nervous and now confused, “Can I ask why?”

I’m sure the depth of my voice was a point of hesitation on her part, nevertheless she had a mission to complete. “Well this is the adult section…we have a separate area for children.”

“Just making sure…from behind I couldn’t tell…” She started to walk away, then turned back, maybe because of embarrassment, “you just look so young. I couldn’t tell,” she repeated herself.

If it weren’t for Baby Sai, I would have told her that this happens often. I readjusted myself to the story, my feet, back in motion.

*this flash piece is cross-posted on gisforgrace. More than likely I will check back in with a final review of the novel here or on GoodReads.